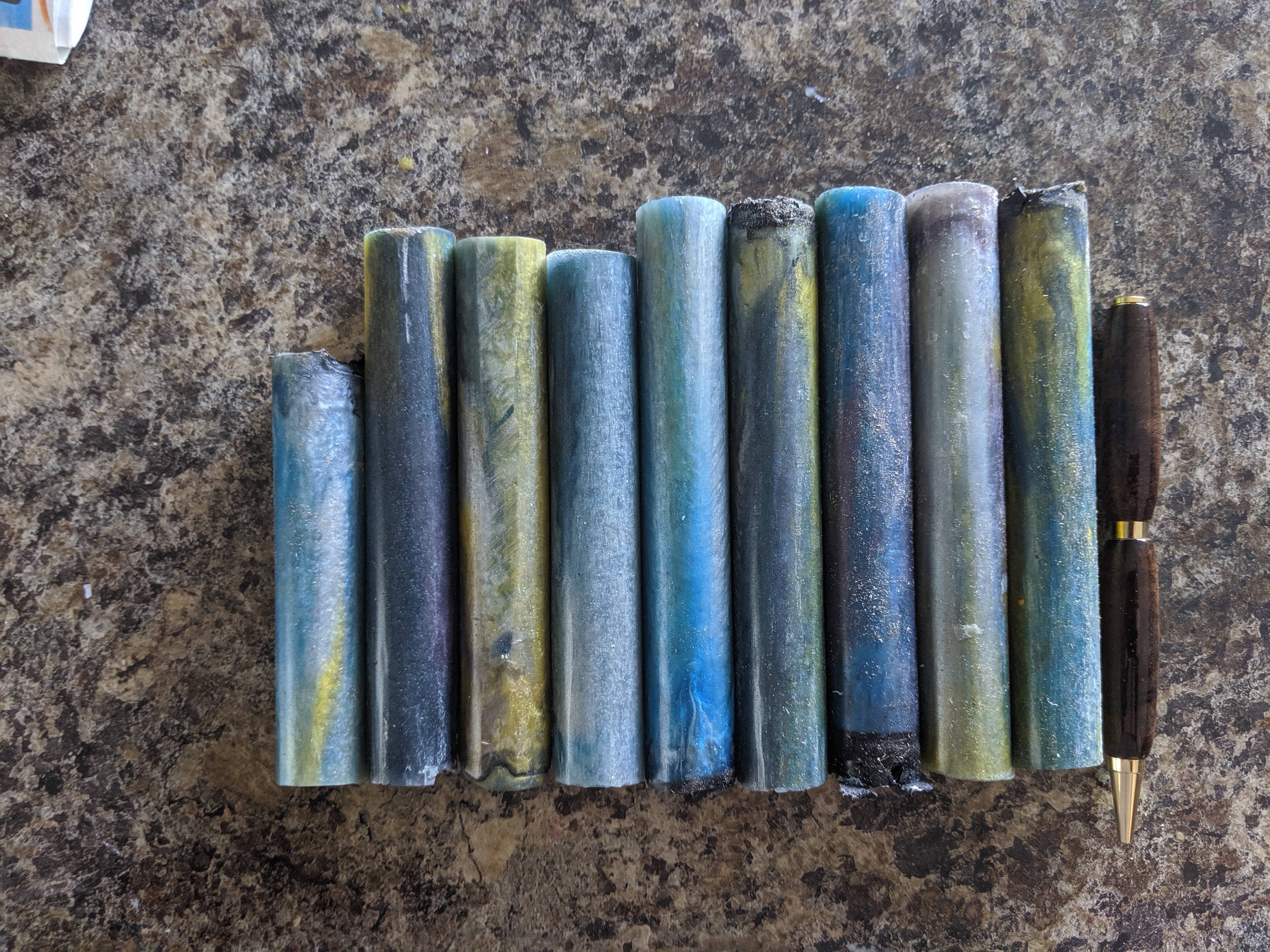 Do you want to learn about casting pen blanks with Alumilite?  I recently did a little experiment to see if I could cast my own pen blanks using PVC and casting resin.  Casting pen blanks is an absolute blast, especially if you enjoy working with colors.    Here are some photos of the process of casting acrylic resin pen blanks as well as a video.

The first step for me was trying to figure out how to seal up the end of the PVC pipe I intended to use for my pen blanks.  I thought I would try this material, as when I used it in previous projects, it basically turned into hard rubber. 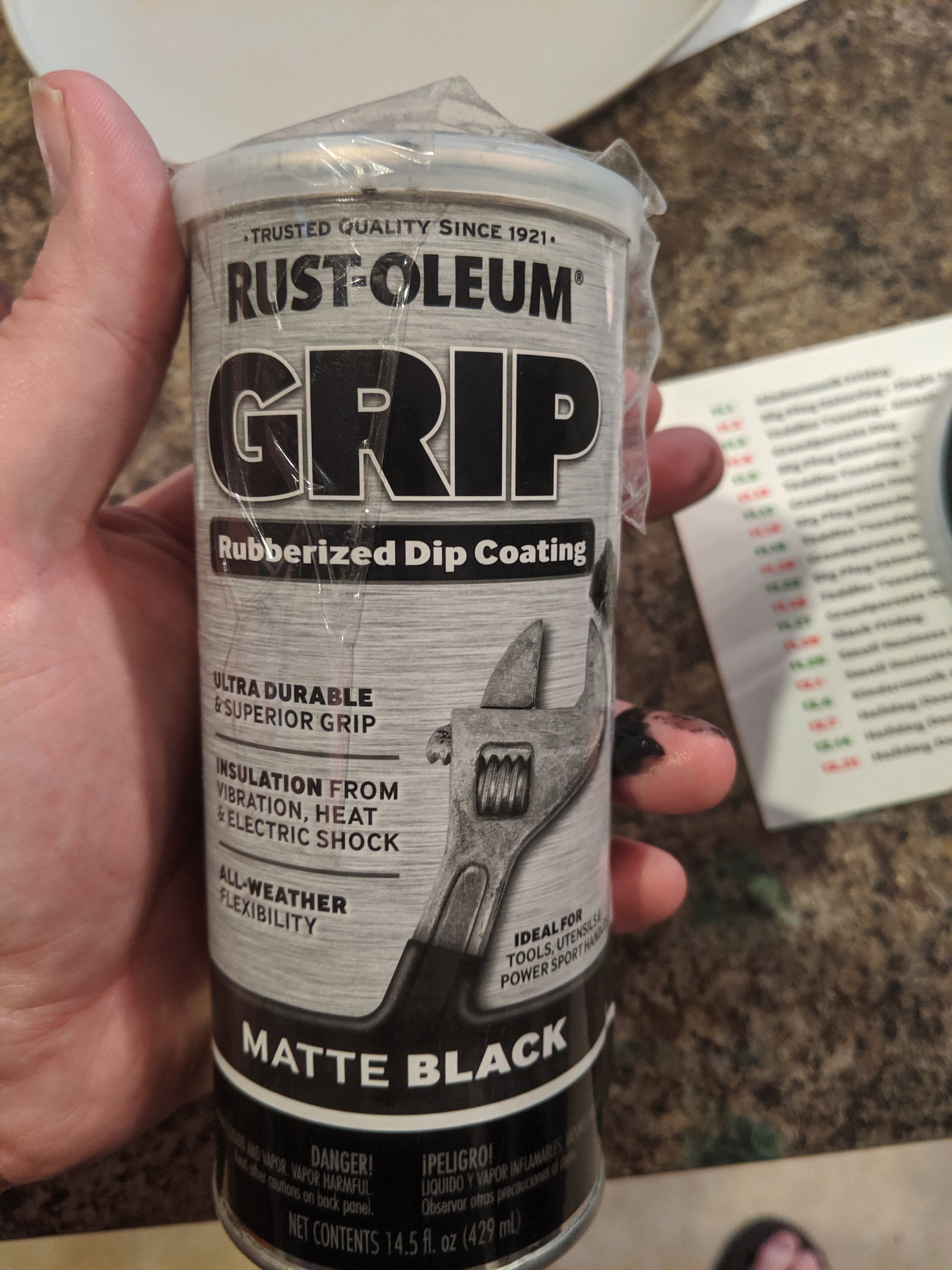 I set my PVC pipes in a little dish filled with the rubber and let it dry.  After, I used an Exacto knife to cut each tube out, while still sealed to the black rubber.  In the end, though, the rubber didn't last long and I ended up scrapping this idea entirely.  What I did end up doing was using packing tape to cover the bottoms of all of my PVC pipes so the casting resin wouldn't pour out of my cast acrylic blank molds. 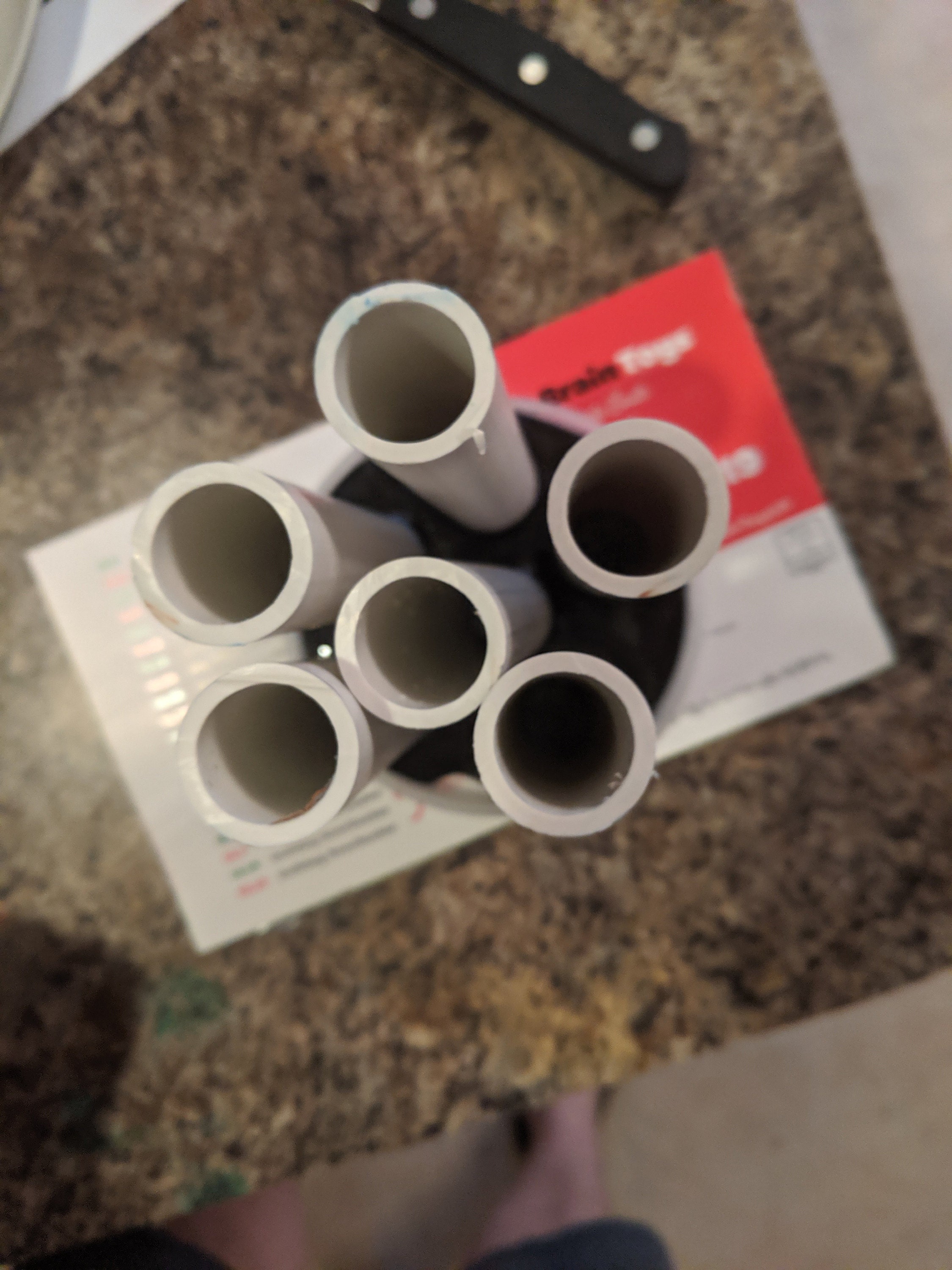 I used this resin from a home store, though I have since had better luck using Alumilite Clear Slow for casting pen blanks.  Yes, it requires a pressure pot, but the outcome is very nice (especially if you are doing any sort of label casting). 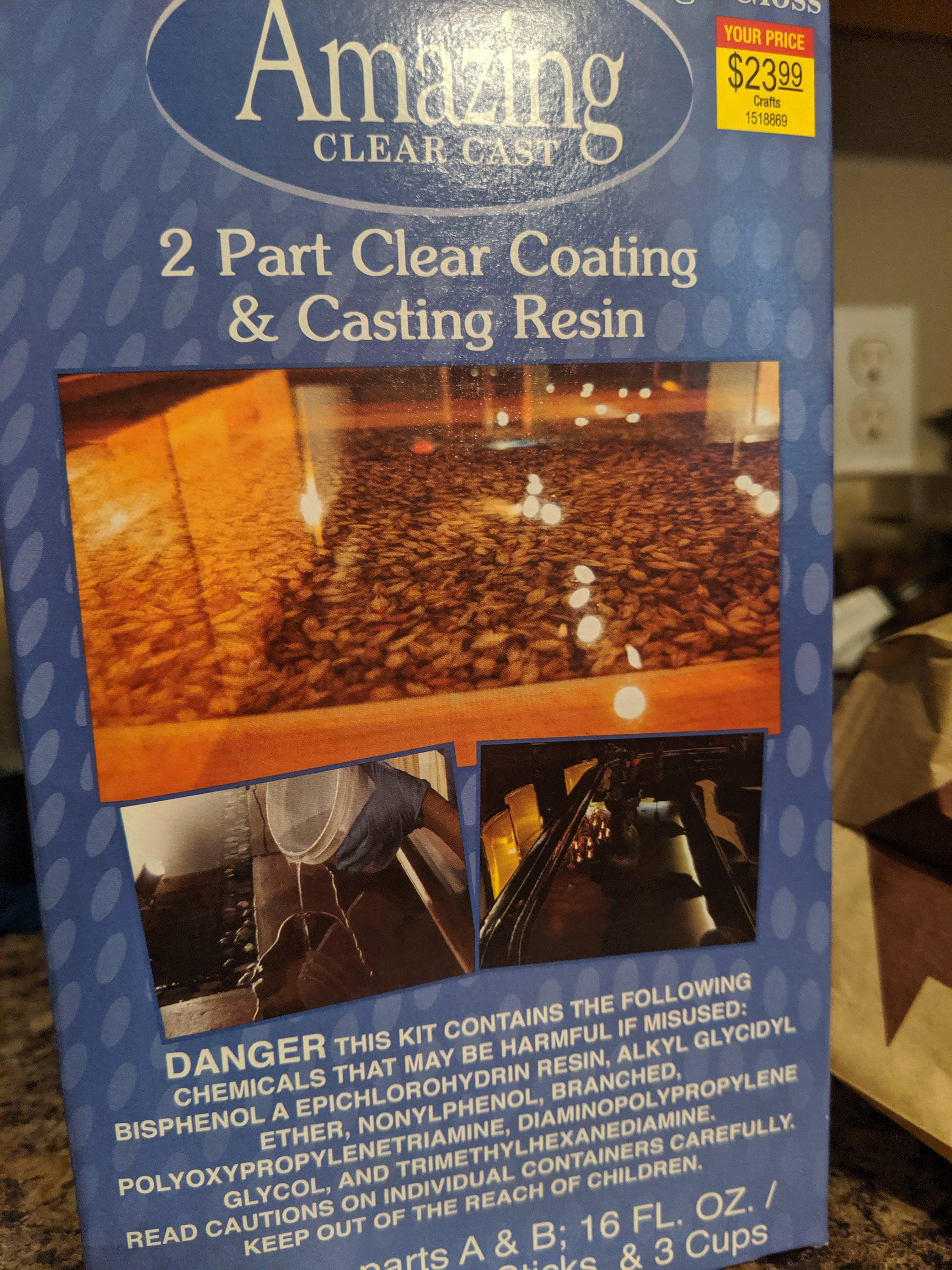 I began by mixing my resin parts and then added various colos of mica powder to the  casting resin. 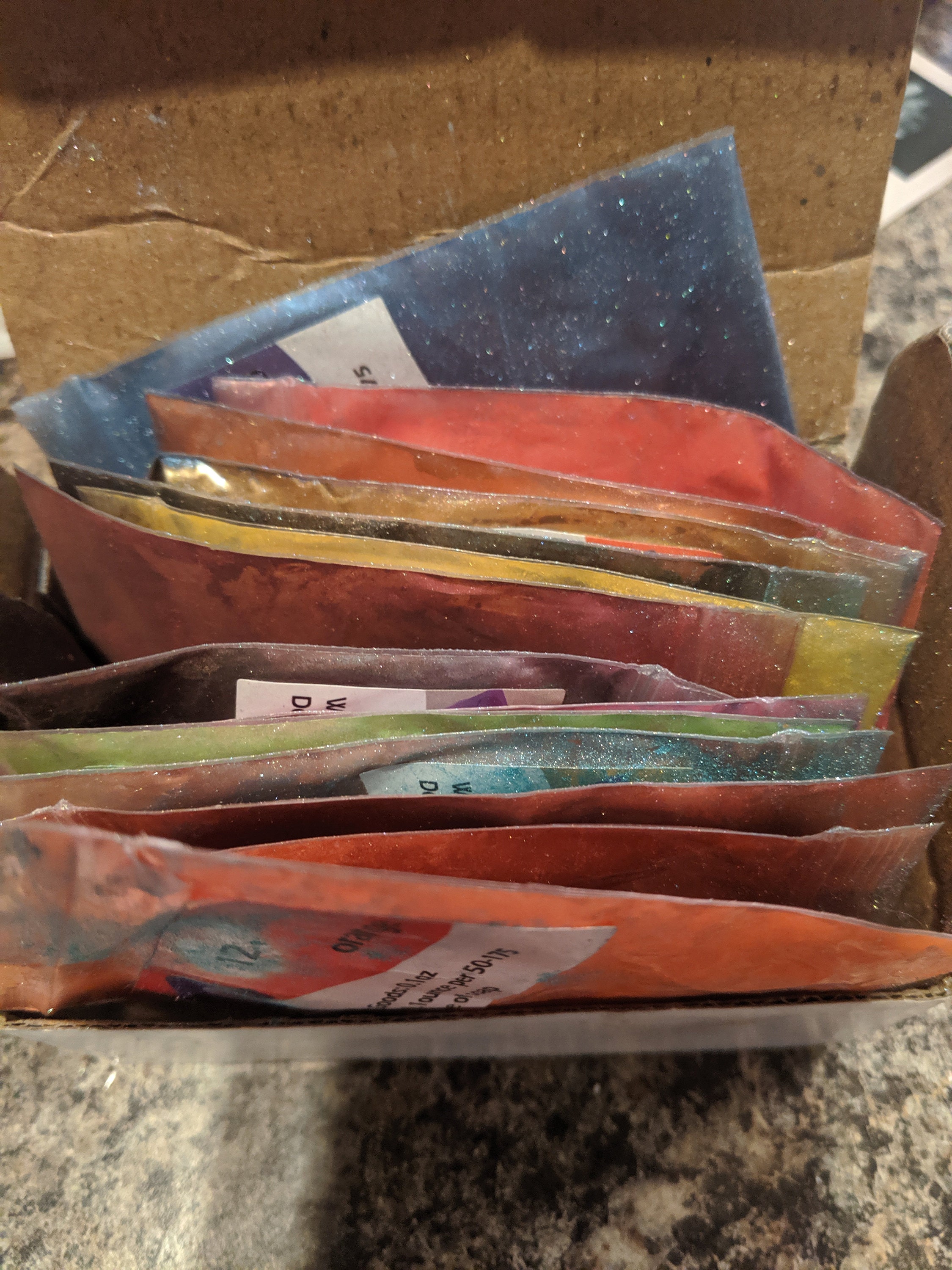 Below you can see a few of the colors mixed up and ready to pour into the PVC pen blank molds. 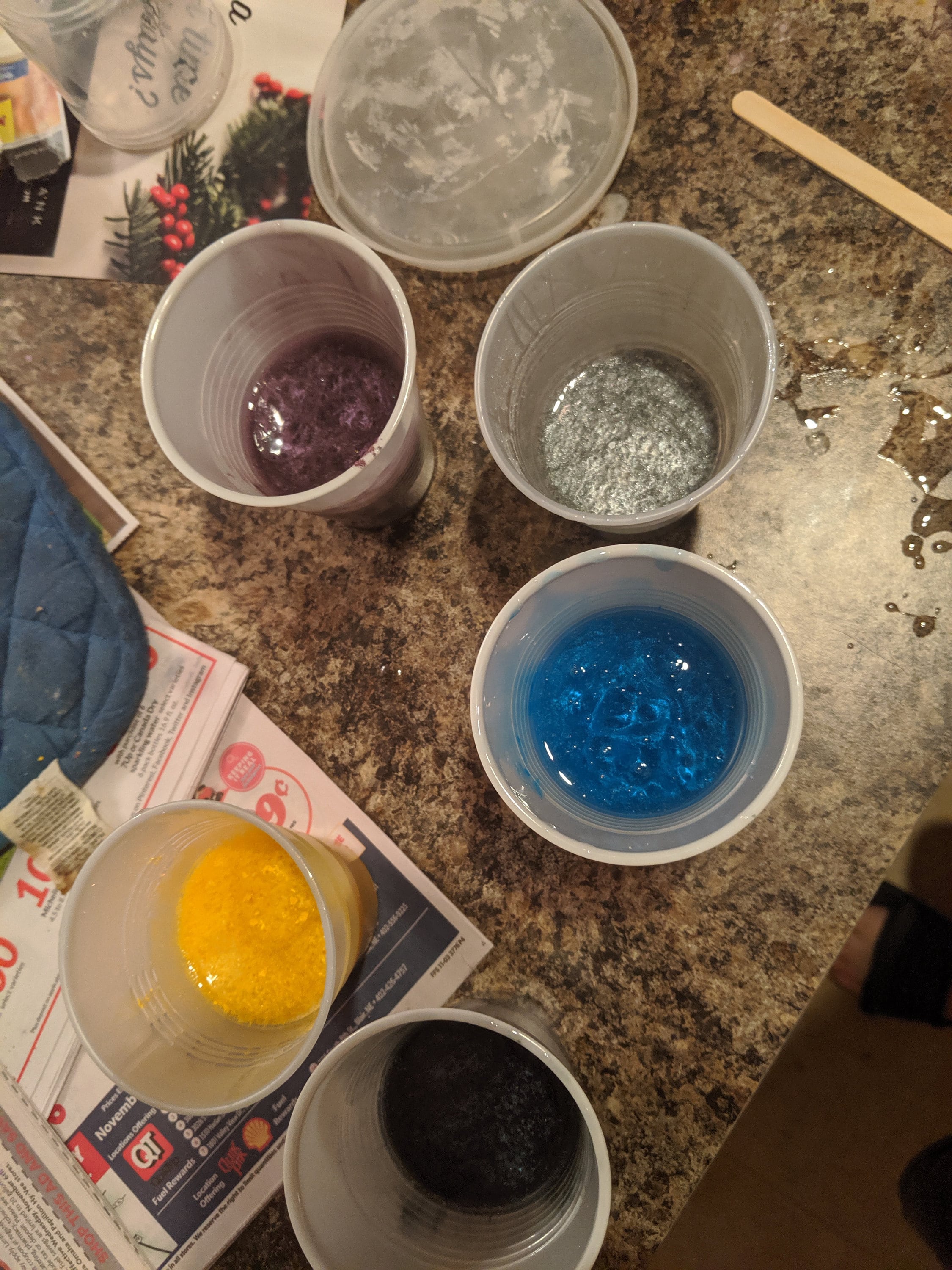 Once the molds filled, I let them set for 24 hours to cure before pounding out the blanks with a punch and hammer. 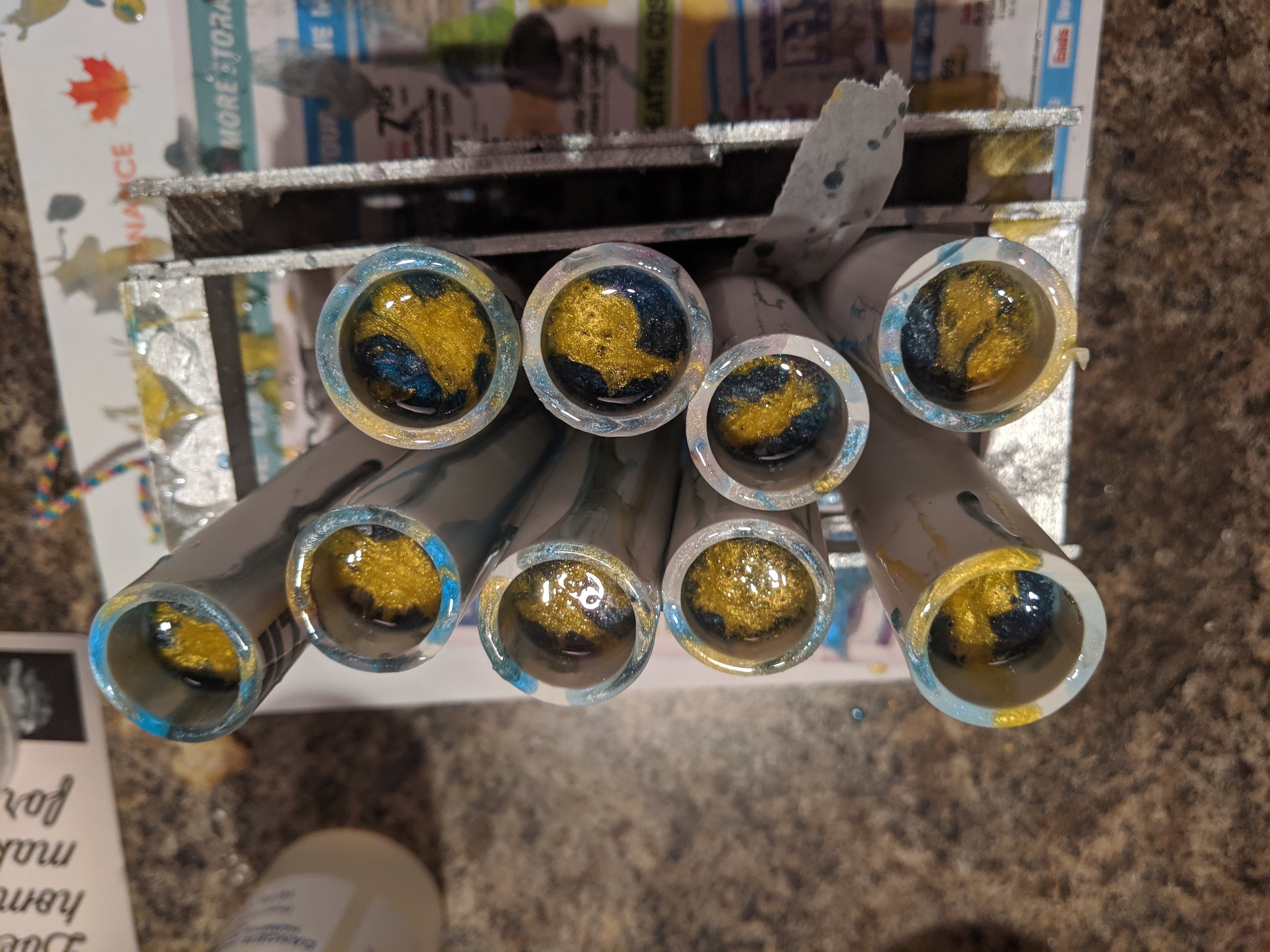 Here are the blanks after being removed from the PVC pen blank molds. 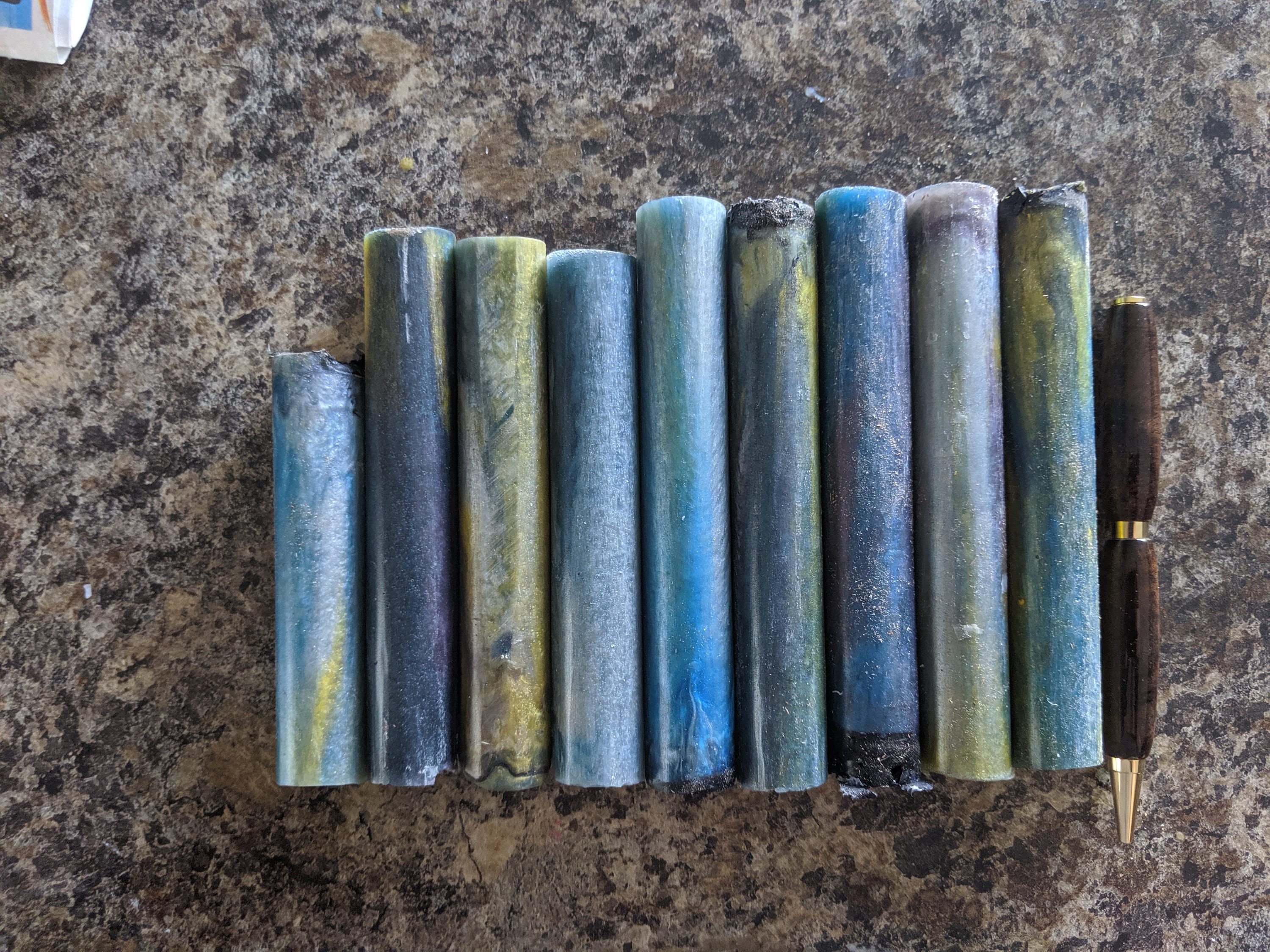 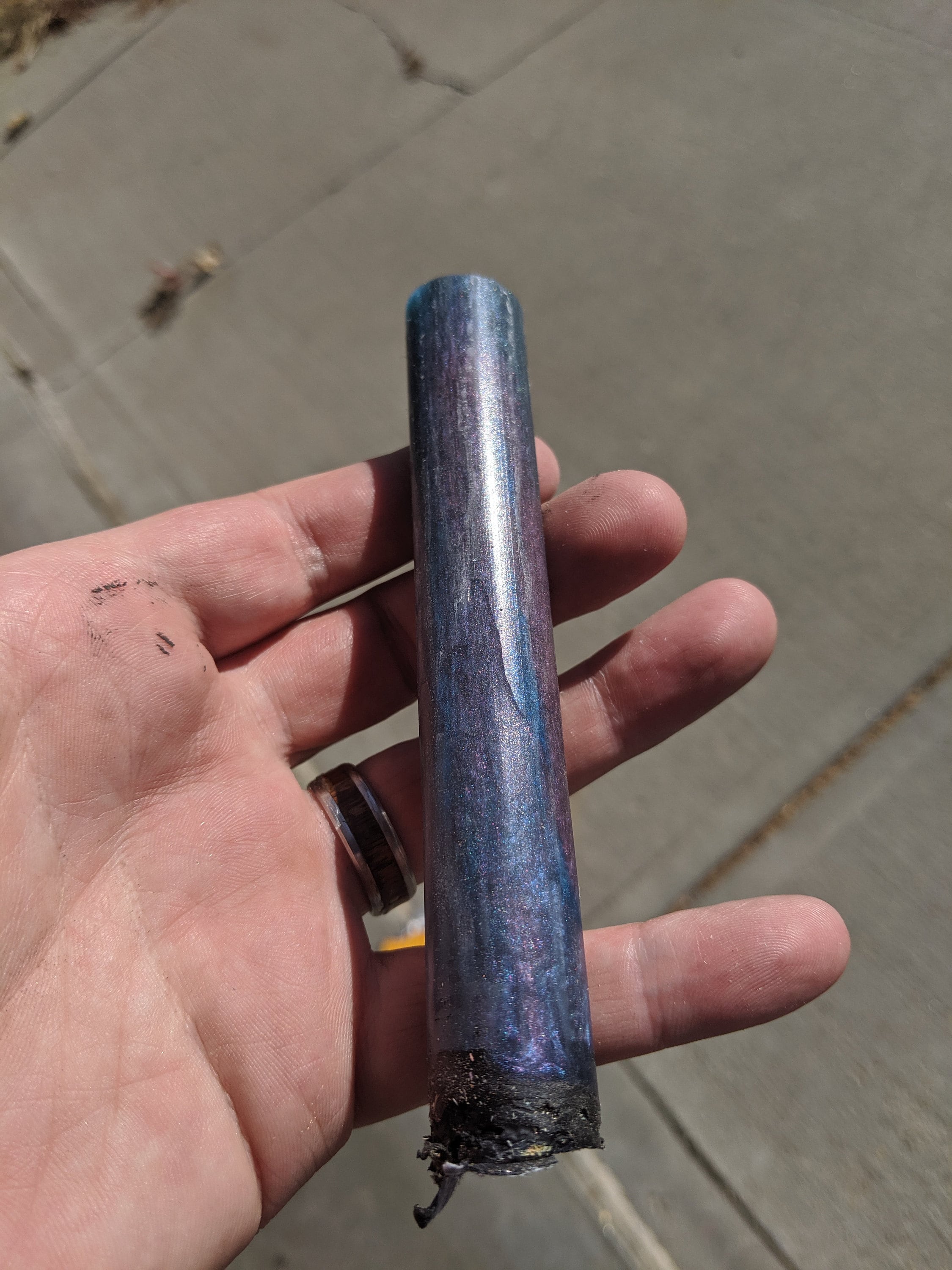 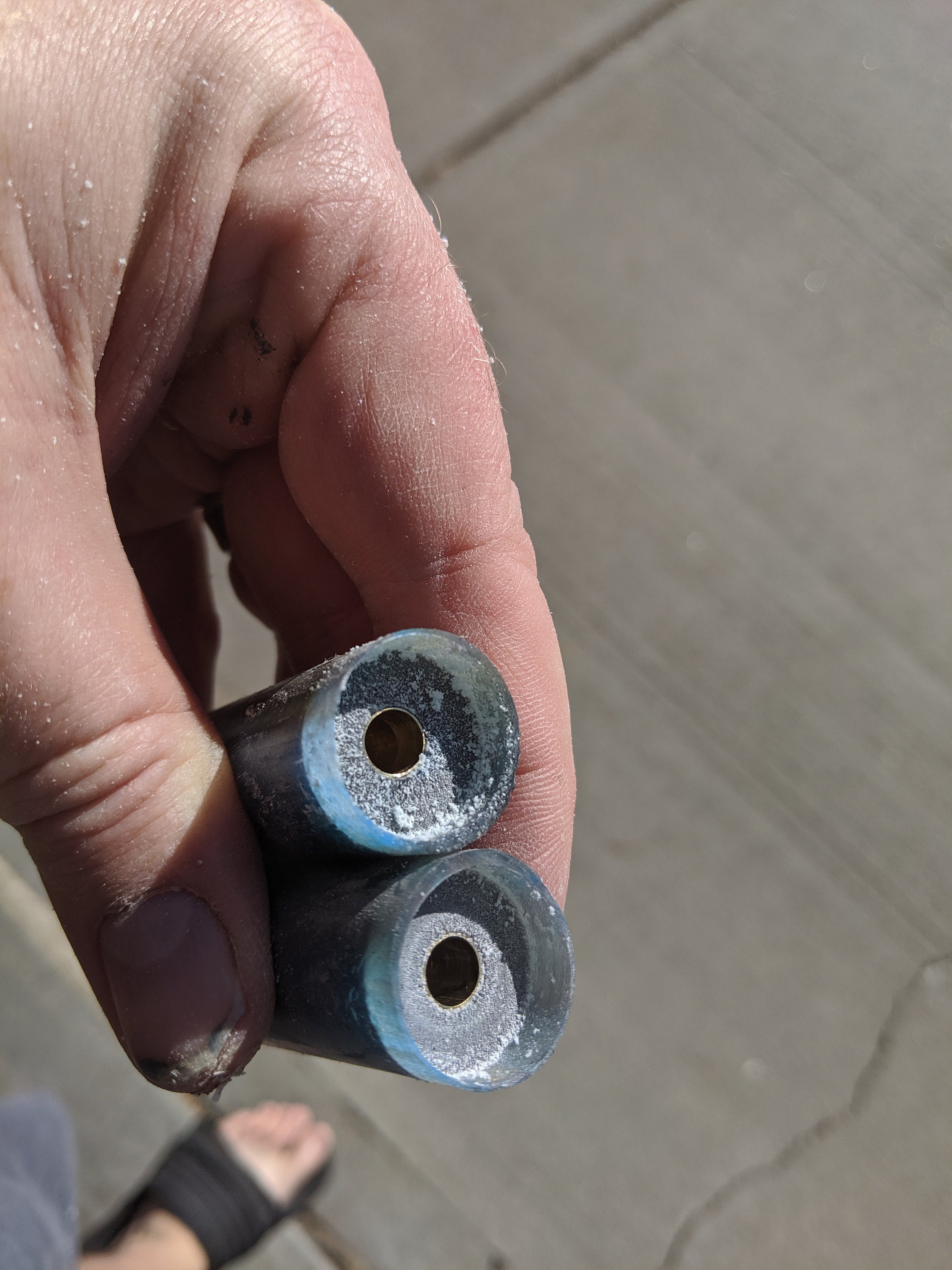 Here is a video of me turning the resin pen blank I had cast.

This is one of the pens created with this method.  The colors are really great!  To see more of this type of cast acrylic blanks I've made, check out these handmade pens. 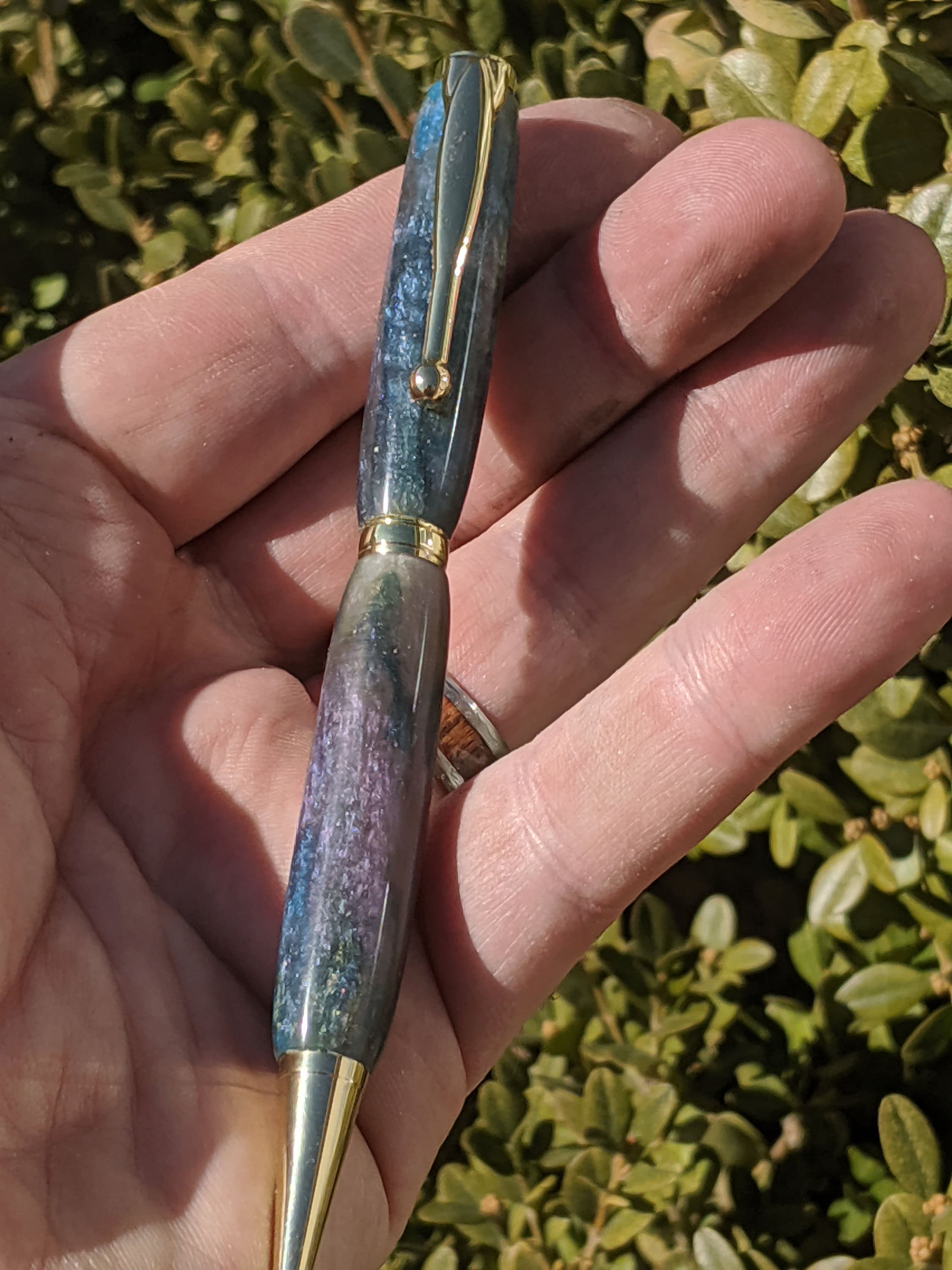